My dream has come true! One of them.

View SEA Trip by Any Means on automidori's travel map.

After just feeling so content, lucky, happy, my morning suddenly turned into chaos. The car and driver I had booked for a trip to Khao Yai did not show up! Financially speaking, I had nothing to loose since I hadn't paid any booking fee. But time speaking, that was my last day in Thailand and I would be flying back home the next day. My plan for that day was PB Valley in Khao Yai. I had no Plan B and would not make any.

The tour desk at Omni Tower had a car rent service. But the rate was twice the rate offered to me. I certainly had not prepared for that much cash. There was another man standing by the table. He probably had felt sorry for me. At last he offered me 4500 baht for a return trip to Khao Yai including gasoline and toll fare. The original rate was 7000 baht something. This man turned out to be the driver. His name was Danis.

After the tragedy I experienced with the first car rental agent -- which will be a story of its own -- Danis, really made my day. Danis was the most thing I felt lucky of having chosen Omni Tower. Danis gave me a bottle of ice green tea. Then, while driving, he called PB Valley for me without me requiring so. He reconfirmed my booking with PB Valley and told them that I won't be able to make it for the 10:30 AM tour and thus booked the 13:30 tour. It was a great thing that Mr. Heribert Gaksch from PB Valley had included the full address and phone number on his email reply to me. His email which I had printed out, helped Danis help me.

I only had several hundred bahts left and one fifty US dollar note. I asked Danis whether he knew a money changer somewhere near PB Valley. He answered that he could bring me to a bank inside a department store on our way. It was Bangkok Bank. Just a small bank with 2 tellers. Very much to my surprise, I had a difficult time to explain that I wanted to exchange this one 50 dollar US bank note into bahts. The teller asked me questions which I don't remember anymore what they were. Then she told me to wait.

Suddenly Danis was already standing behind me. He must have been wondering what had taken me so long. Afterwards Danis spoke to the teller and it seemed that the teller now understood what I wanted. Ah...

Danis left. The teller required for my passport. She made a copy of my passport and also both sides of my $50 US bank note. Lastly, I was required to sign on the copy paper. I really can't imagine how much longer it would take if I had, let's say, 10 bank notes to exchange. Would she make a copy of both sides of all my 10 bank notes? Moreover, I have been exchanging foreign money in foreign money changers and banks quite a couple of times, and yet this is the first time my passport is required. How poor me. Last night the guys at the gymnasium ran into the elevator when I wanted to ask where I could get towels. So last night I looked hot, but now I look like a criminal. Great. 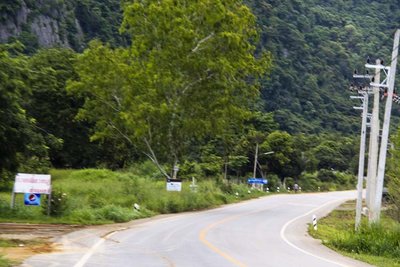 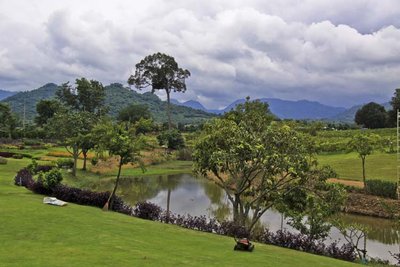 In PB Valley, at last. While waiting for my lunch to be served, I took some shots of the surrounding. 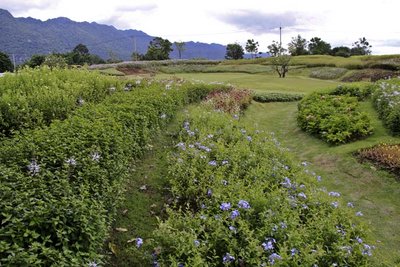 If only the sky were clearer... 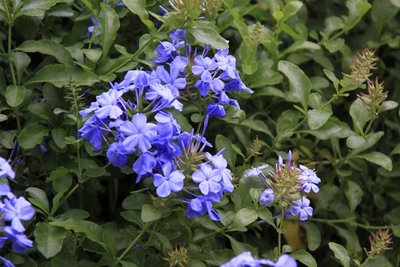 Just a close up the flowers. 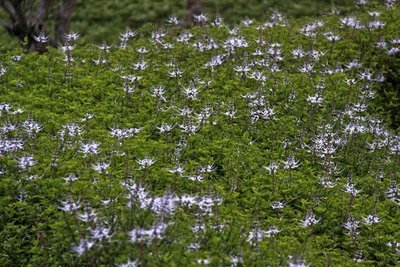 And... snowflakes covered the shrubs! Hahaha... just kidding. Those are flowers. But they look like snowflakes, don't they? 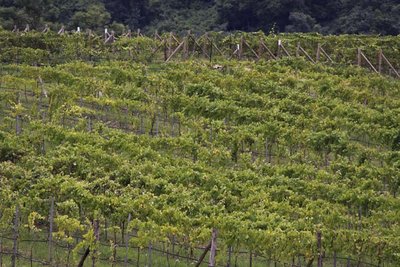 This is part of the vineyard. This was my first time looking at a vineyard in real life. There's something about vineyards to me. It's for sure because of the stories from the Bible told to me since I was a little kid. But I can't tell in particular of which story. I am not a fan of either grapes or wine. It's just... what is like to walk in a vineyard? 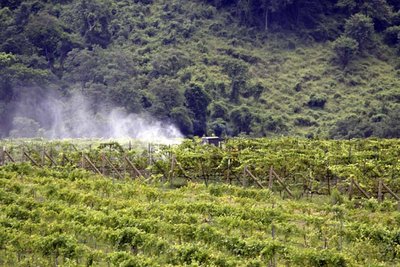 The vineyard was being disinfected. Maybe because I was coming... 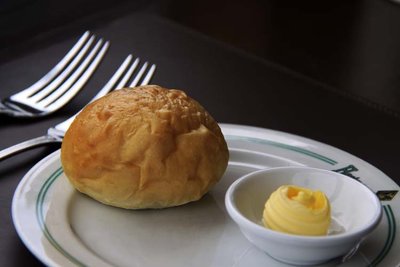 The Appetizer Series... bread and butter, ... 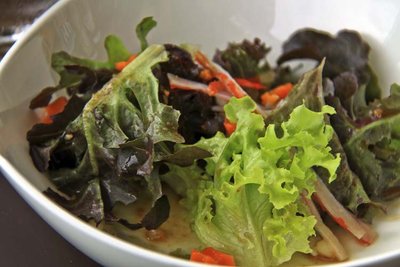 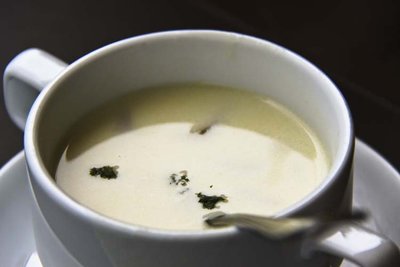 ... and mushroom chicken soup which was so tasty. Unlike salad which I regard as compulsory, this soup I drank with pleasure. 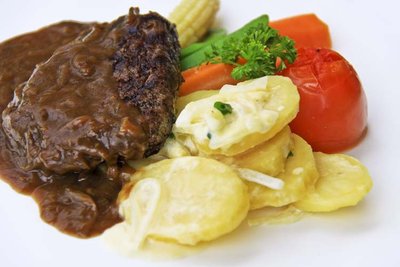 Seeing how much portion I got, I was thinking of sharing my meal with Danis. It looked like that the vicinity was quiet. I was worried Danis couldn't find a place to have his lunch. I searched for Danis around the parking area, but a staff told me he had left. So I ate some and required most of it to be wrapped. That will be my dinner and I will save my expense. 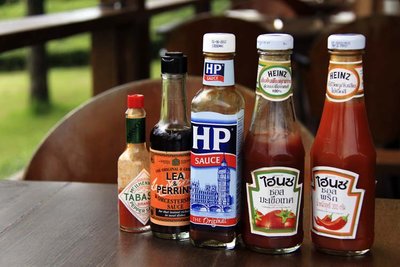 Not tasty enough? Make your choice! 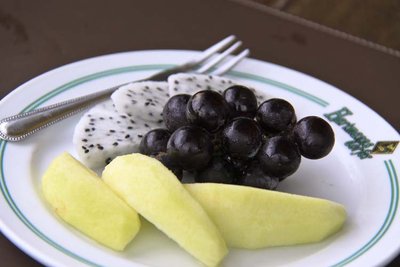 Dessert. I finished the pear, dragon fruit, took one grape, and wrapped the rest with the napkin paper. Tomorrow evening I'll be back home. I can share these grapes with Mom.

After lunch, I went for a tour around the vineyard guided by Vira. 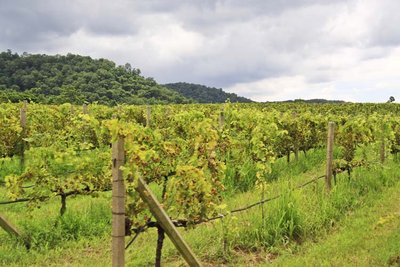 A closer look of the vineyard from my cart. It was rather complicated to listen to Vira's explanation, record a video, and take pictures all at the same time. 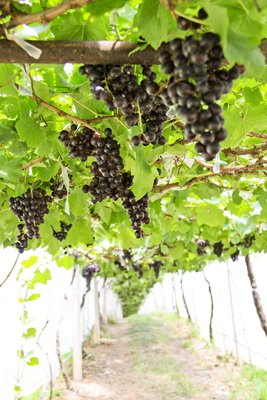 My dream has come true! One of them. You can't imagine how thrilled I was. 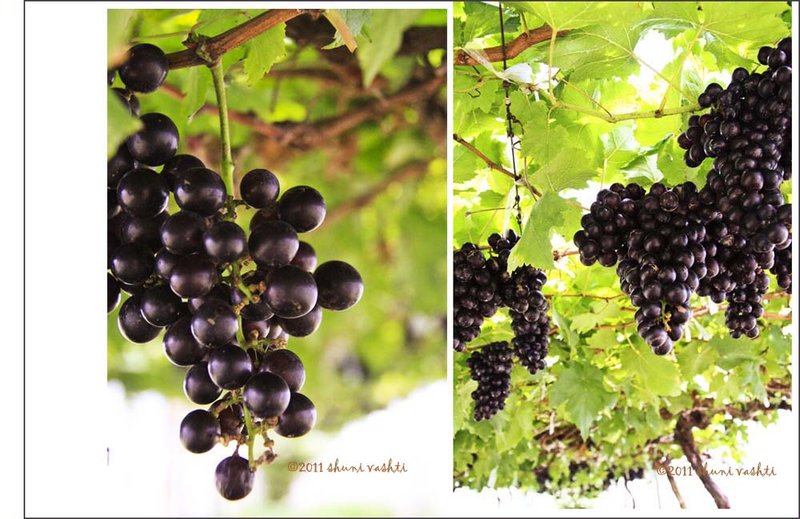 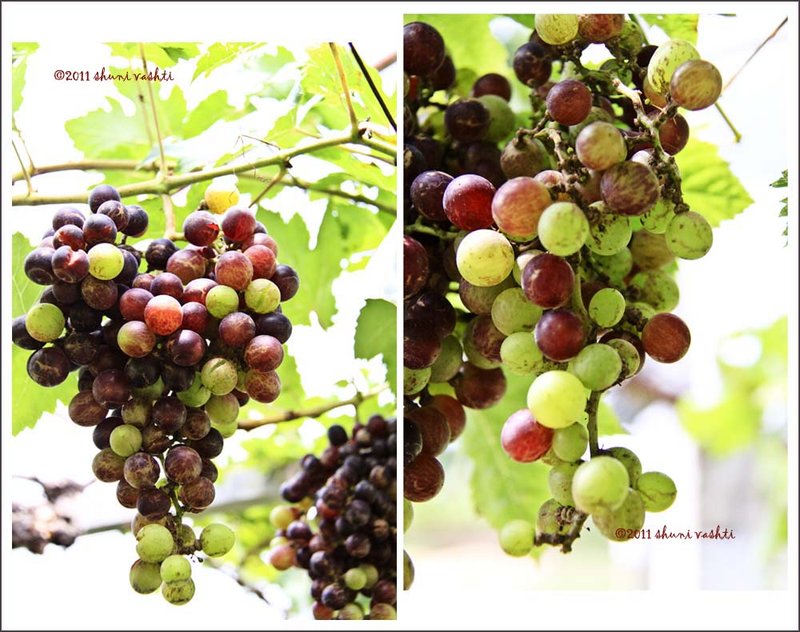 Next activity was a tour to the wine factory. That will be my next post. For the whole package of tour and lunch, I was charged 680 THB. It was a surprise for me, because I thought it was 830 THB. Yippiee! At the souvenir shop I bought some bars of grape soap for Mom's upcoming birthday present.

P.S.
1. Thanks to Bangkok Insight Smart Guide from where I first got the information about Khao Yai.
2. Usually, just a little of sour thing is enough to make Mom's teeth use to ache (ngilu). But the grapes from Khao Yai, she said, were very sweet and went perfectly fine for her teeth.

Previous Next Table of contents

Comments on this blog entry are now closed to non-Travellerspoint members. You can still leave a comment if you are a member of Travellerspoint.

If you aren't a member of Travellerspoint yet, you can join for free.